Where does belly button lint come from?

The Edge, August 13, 2005
< Only recently has the “fluffis outis,” or “lint gland,” as it’s more commonly known, been discovered—and by accident too (the surgeon had to go “back in” looking for his watch). Your lint gland sits just below the surface of your bellybutton, shaped a little like an apple core. div class="separator" style="clear: both; text-align: center;"> 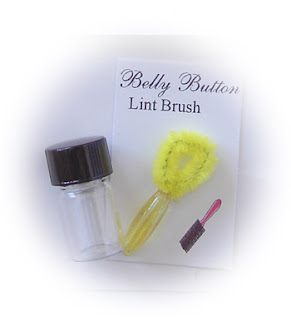 Your lint gland works similarly to a fairy-floss machine, and can be heard at work if you place you ear on your stomach. The yearly production of lint ranges from as little as .074 grams and, in some rare instances, up to a whopping 2.8 tonnes of lint. It all depends on how charismatic a person’s gland is.
A lot of internal pressure is needed to create lint. If the pressure drops below an “acceptable” level for creating lint, your lint gland will initiate a convulsing sensation—what we call hiccups. This spasm helps maintain enough pressure to keep the lint creation process running smoothly. Holding your breath during a time such as this helps to stabilise the pressure, usually stopping the hiccuping process. (Note: people who hiccup for long periods, even after holding their breath, most likely have a pressure leak somewhere under their arms—usually caused by corrosive deodorant.)
So why do we have bellybutton lint? Well, it has numerous applications.
Evolutionists have always claimed, and still do, that the lint is all that now remains from our evolutionary time as a guinea pig. Some countries have known for centuries the high nutritional value of bellybutton lint. With its high concentrate of folate and chicken-like taste, they serve it as an exotic delicacy to those who can afford it (apparently it tastes great with soya sauce and honey). In some of the colder-climate countries, people make garments out of lint, which is proven to be up to 40 per cent warmer than sheep’s wool. Other civilisations have been known to use lint for housing, communication, recreation and transport.
So it seems that bellybutton lint really is nature’s own Swiss army knife.

Reader's Question: Why is the lint blue?

A. A healthy human produces a dark blue lint. The less healthy the lighter in colour it gets.
I believe the dark blue colour in the lint is from the gases that react in the “fluffis outis” gland . This is for the same reason the gasses in the air make the sky look blue also.

INTERESTING FACT: The fear of being consumed by bellybutton lint is called bellyfluffobia. These people are colloquially refered to as “navel gazers” and constantly stare at their bellybutton to make sure none develops. As they say, “A watched button never fluffs”.
Tags: Silly, The Edge
Newer Post Older Post Home