How many Weet-Bix does it take to change a lightbulb?

The Edge, September 17, 2005
This requires some explanation but is a valid question that many are quick to dismiss as a joke. First, did you know that if all the Weet-Bix eaten in Australia in 2004 were laid end-to-end it would be a very expensive exercise and a logistical nightmare to construct (not to mention the minor side effect of THE ENTIRE OCEAN BEING SOAKED UP!). 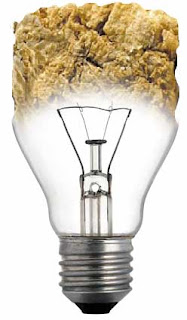 Sanitarium claims this cereal of ‘Bix would stretch almost three times around the equator. When asked for hard evidence, they admitted they hadn’t actually tried it but in theory it worked out.
Well, we all know evolution is also a theory and it’s when we combine these two theories we find our answer.
Using evolution’s theory, we discover that by the time our friendly “soy-milk soakers” were laid out around the world three times the final, humble Weet-Bic (the singular of the plural, Weet-Bix) in the line would have evolved into a light bulb. Therefore, in answer to the initial question, it takes an entire year’s worth of Weet-Bix to create a light bulb that can be used to replace the original (BTW: this will have to take place over billions of years).
The first instance of a light bulb being changed is recorded in the first chapter of Genesis. “Let there be light,” God said, and there it appeared. Since then, humans have been searching to find a way to change light bulbs with the same ease as God did. We’ve experimented widely over the years and the results of Irish, blondes or accountants changing light bulbs all seem to lack the relaxed nature God’s method involved.
Some of the most disastrous attempts at changing light bulbs have involved marshmallows, asthma pumps and V8 pogo sticks. However, the most catastrophic attempt happened only recently (you may have seen it in the news), which involved a tractor, two goldfish, a hair dryer and disco ball. Since the accident, all further experimentation has been postponed indefinitely. While Huey was able to swim again with the aid of a “swimming frame,” Duey had to be flushed down the looy.

Friendly advice: While fish may appear to like eating Weet-Bix, don’t put too many to your fishbowl at once (and never add So Good). 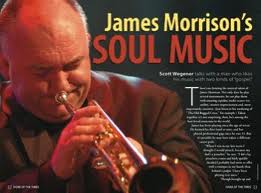 Scott Wegener talks with a man who likes his music with two kinds of “gospel.”

There’s no denying the musical talent of James Morrison. Not only does he play several instruments, he can play them with amazing rapidity, multi-octave versatility, creative improvisation and, most importantly, emotion. (Just listen to his rendering of “The Old Rugged Cross,” for example.) Taken together, it’s not surprising, then, he’s among the best-loved musicians in the world.