Why do some words have silent letters?


First of all, this question is technically flawed. All letters are actually silent—that is, unable to speak, or dumb. Therefore all words actually have silent letters (or dumb letters, as I call them). 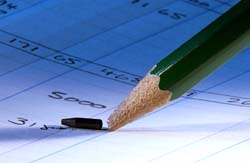 This question, however, is referring to the inclusion of letters in words that, when read out loud, have no bearing on the final way a word sounds when read.
The inventor of dumb letters was H B Pencille. After creating the first commercial lead writing implements, he nearly went broke while waiting for customers to return and purchase a replacement.
After a brainstorming session with his then associate, H I Lighter, who went on to be a brilliant success, several ways were drawn up to increase the frequency of a customer needing to repurchase a pencil.
One method used was the intentional creation of random cracks in the leads so that they would keep breaking, and therefore require sharpening several times a day, until whittled away to nothing.
Another method used, for a short while, was the hiring of bandits to storm into buildings, demanding their pencil cases be filled with writing implements.
Probably the sneakiest method ever used, and undetected for years, was the subtle invention, and gradual introduction, of dumb letters. By introducing dumb letters into the English spelling, and this is the point, pencil usage went up 7.623% per paragraph, which in turn increased the return rate of customers the same percentage due to their higher use of lead in their pencil.
H B Pencille later did go broke after overspending in the development of a left-handed pencil. It never drew many sales, probably due to the lack of left-handed erasers.
One wonders if we will have silent letters in heaven. What about pencils also: are they required in heaven? One thing I think we can all be certain of, there will be no left-handed people in heaven, I mean, no-one will be left handed in heaven, I mean, ‘cause you know, everyone will be right and perfect . . . um . . . just forget I said any of this last paragraph, lefties. *blushes.*