How can I have an effect on world hunger?

The Edge, May 13, 2006
First, I assume you mean positive effect—that is, trying to reduce world hunger (or should that be negative effect, taking it away . . . hmmm?). 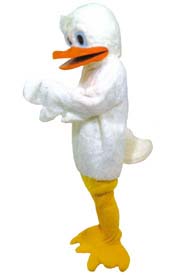 It’s overwhelming to think of the entire world’s hugenormous hunger problem but here’s an example of how one boy’s actions led to a great result.
While playing kick-to-kick with himself, Leo accidentally booted the ball into a duck flying past (yes, this animal was harmed in the making of this story), which sent it to a spiralling death, landing on the helmet of the front rider of a tandem bike.
They steered to a wobbly stop, leaving the back of the bike hanging over a train line.
The approaching train breaks with emergency and causes Mavis, in seat 2G of carriage three, to lose control of her reading dentures, which shot down the aisle, causing the ticket inspector to slip and throw his tickets in the air.
The resulting scramble for free tickets, as they fell like snow, caused a businessman, who was sitting in the middle of all the commotion, to lose his job, as he was on the phone insisting to his boss that he was sick in bed.
His replacement turned up to work the next day with a pen in his pocket, which happened to leak ink in the shape of a pig—unbeknown to him.
Plagued all day with mysterious small talk about pigs from other employees, who innocently thought he liked pigs due to his shirt’s insignia, he took offence (being a larger man) and reported the business to authorities for harassment.
The harassment claims officer, in his submission of the complaint to the employer, sent the letter to 1 / 20 Cecil St instead of 120 Cecil St, where one very confused self-employed toothpick whittler vowed to represent himself in court.
On the way to court his car broke down on the on-ramp to the freeway, causing one very animated Mr Winterbottom, in the car behind, to miss the official opening of duck season, which only he could declare open, thus many ducks’ lives were saved.

The moral: One duck had to die to save the rest? Nice, but no. If you make the effort to get the ball rolling, you can make a difference!
Tags: Silly, The Edge
Newer Post Older Post Home