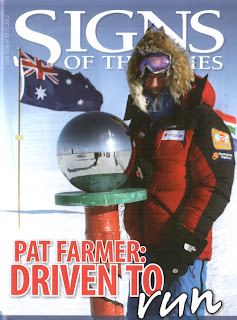 In April 2011, Par Farmer began running form the North Pole to the South. Scott Wegener spoke to him about his 10-month journey.
Signs of the Times cover story, Nov 2012

You’re ‘courageous’ if you battle through a seemingly hopeless situation, or perhaps ‘crazy’ if you created the situation on purpose. However, if you put yourself in such hopeless circumstances in an effort to help those in an even worse predicament, you’re Pat Farmer.


The Run
In what must be one of the greatest demonstrations of what the human mind and body is capable of, Pat Farmer has run from the North Pole to South Pole to raise funds for the International Red Cross’ clean water projects around the world.
The 21,000km route was covered in just over 10 months at an average of over 65km a day. Some days Pat ran up to two and a half marathons in a day, which is more than 100km or 5 of Sydney’s City to Surf fun runs.
The run was full of adventures, including dangerous animal encounters, armed escorts, weather from – 40 to +40 degrees Celsius, breaking world records, being robbed, a flying truck, being weed on by a cow, bitten by dogs, a large collection of personal injuries and near-death experiences for Pat and his tiny crew. (For the full impact you really need to read the inspiring journal of the run: Pole to Pole, One man, 20 million steps. )
Perhaps what astounded me most is the struggle he had to get sponsorship. To put it simply, almost no one thought he’d make the distance – so almost no one wanted to sponsor him. Pat sold his house and car to get the start up funds so he could begin the run and just hoped that enough sponsors would eventually get on board to covers the huge mounting costs.
Pat attributes the survival of several near death misses on the trip to smart planning, being prepared and also a little divine help. “I’m a big believer that someone is watching over me,” he says.
In suggesting his guardian angel may have preferred a couch potato to look after rather than follow him all round the world, Pat admits his extra ‘support crew’ are “kept on their toes.”

The Man
This isn’t Pat’s first long distance run. He’s been an ultramarathon runner (someone who runs in races that are further than a traditional marathon) for many years. Some of his runs include running across the US, around Australia and from the Northern tip to the Southern tip of Australia. In doing so he’s not only set world records but raised millions of dollars for good causes – not bad for someone who was “not good at school sports”.
“My legs are my form of communication,” Pat says while walking and talking to me. “While I have the ability to put one foot in front of the other, I’ll try and use them as my way of communicating messages of support to worthwhile causes. I try to capture the imagination with what I do.”
If you’ll excuse the pun, poles apart from Pats epic physical feats was his stint of nearly a decade sitting in Australia’s Federal Parliament. This was a time Pat found somewhat frustrating.
“ I wanted to actually make a difference , not simply sit in meetings talking about changing lives,” he says.  Even so, Pat still had some highlights from his parliamentarian days.
“ I did achieved some good things, even though the world’s media might consider them minor things. From helping a lady get a set of denchers  that hadn’t eaten anything solid for two years to helping someone with an immigration issue get his parents out for Christmas, and up to building an $80million medical school. These are extremes of the spectrum, but to each of the people involved in the situations, very, very important.”
A few months after Pats Pole to Pole run he was awarded the 2012 Australian Geographic Society's Adventurer of the Year. Pat has also won Australian Achiever of the Year back in 2000.
Despite Pat’s amazing achievements, which grants him unchallengeable bragging rights, he is rather humble about his achievements. Pat prefers to draw attention to the cause he ran for and encourage others to believe in themselves and what they can achieve if they put their mind to it.

Pat admits he’s not the world’s greatest runner, but says the strongest part of his ability to run nonstop, literally from one end of the earth to the other, is the strength of his mind. It is his strong mind that gives Pat the willpower and the ability or overcome pain, and even boredom from so many hours out running by himself. It’s also believing in himself and what he’s capable of that helps him to achieve monumental tasks.

“I’d like to think I was an example to everyone that they can achieve anything they want to if they put their mind to it,” he says. “First, you have to get out there and have a go, but second, break it down into bite size pieces. Often people are over awed by a project and they don’t just take it one step at a time.”

In the times Pat hurt most on his run, he would think about the next time he could see “the lights of his life”, his two children, Brooke and Dillon. Pat has had to raise them without his beloved wife, Lisa, who died unexpectedly at 34 from heart disease. Brooke and Dillon’s names were even written on Pat’s ski’s to help motivate him through the horrendous conditions of the Artic.

The Cause
These days raising money and awareness for a cause usually involves shaving your head or growing a moustache, but Pat wanted really draw attention to a cause he’d recently grown so passionate about – clean water.
Pats passion for the Red Cross’ clean water projects came after witnessing the real poverty in India, Nepal, Egypt and Peru in 2008 and in the following year while spending the school holidays with his kids helping an orphanage in Thailand.
“These experiences influenced me profoundly and left me wanting to do something practical to help,” he says. “Specifically, to raise awareness of the poverty that exists in some of the world’s poorest communities and to raise money to build wells and to provide clean sanitary conditions for them.”

Pat points out how every 15 seconds a child passes away from a disease caused by lack of safe drinking water, inadequate sanitation or poor hygiene – things we take for granted in Australia and New Zealand.
“In East Timor a child died before my eyes. In South-East Asia I saw children covered in needle-stick injuries in a dump; they were trying to break syringes down to sell the metal inside for bottles of water. It was a heartbreaking turning point in my life. I wanted to raise an enormous amount of money for such a cause. “

The Results
Pat dreamt of inspiring just 50 million of the world’s total population to donate as little as $2 each - reaching $100million.
Astoundingly, by the end of his epic run Pat had ‘only’ raised a mere 0.1% of what he hoped to - $100,000.
Falling so short of the dreamt financial goal, was the perilous run worth the energy? According to Pat, without doubt.
“We affected a lot of people by what they saw, which you can’t put a value on. For example, the president of the Red Cross in Columbia said they had never received so much positive publicity, even from in times of catastrophe when they’re helping out with mud slides and hurricanes. There was something very positive that came out of this that you can’t get form just mail-outs or a news reader saying there’s a worthy cause that needs support. It’s about people actually seeing another human being prepared to hurt and ache for the sake of a good cause – and when they see you out running in torrential rain or searing heat, it impacts people more than a traditional campaign. “

And now . . .
Since returning home, more donations have come in and wells have already started to be installed and make a difference in people’s lives.
I’d like to appeal for a donation from you, for a cause that lead one man to run to the height of the earth, to help some of the 880million fellow human beings who live without the most of basic item we take for granted – clean water.

Please visit PoleToPoleRun.com to make a donation before you drink your next glass of water.