[To take part scattered throughout the 'preliminaries' of church] 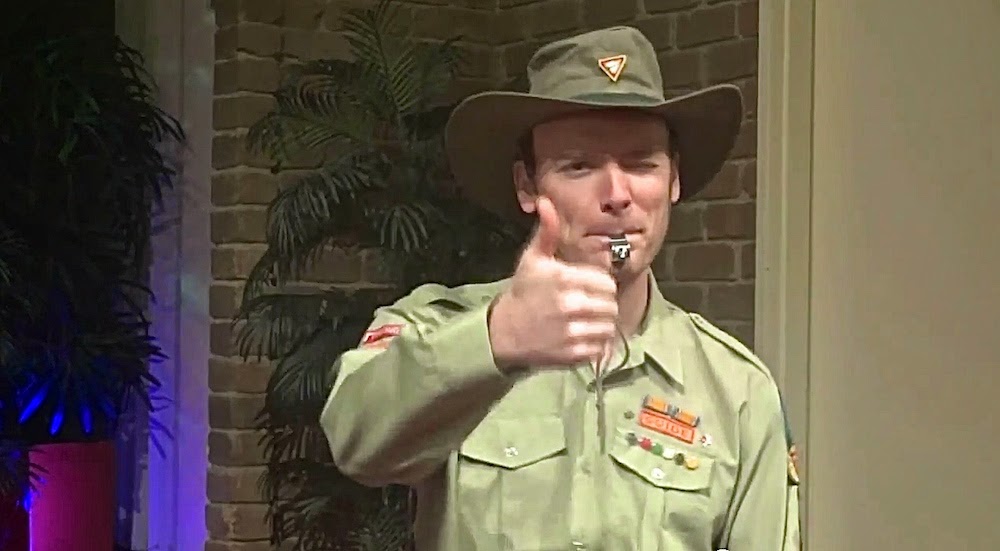 Major Encouragement is dressed in uniform and does not speak, but makes a whistle for every action he does. He is serious and intense about his role of encouraging people. He encourages people by giving a loud whistle and making a strong arm/fist across his chest as a symbol of strength - his "Encouragement call". He also has a sign-off each time, which consists of a salute that turns into a thumbs up and a wink, before he exits.

Part 1: Live SkitGlum 1:  Here we are at church, again. No doubt today will be a sermon about encouragement, again. [sigh, reads bulletin] I don’t’ see anyone coming up and encouraging me. Jesus at the heart , My....

Major: Loud blow of a whistle cuts off sentence from side room, major marches in, Bible under the arm, short whistle every step. Stops at Glum.  Points to them and gives them an encouraging  fist pump/whistle.

Major: signs off with a salute that turns into a thumbs up and then turns and marches out, with a whistle for each step.

Glum 2: [walks in as Major is leaving – sits and ‘sighs’ as looks through paper] Look at this word: wars, again, famines, again, corrupt politicians, again [puts paper down]
Grandma’s in hospital, again, jack is in trouble at school, again, rent’s due, again. Bills, bills and more bills again and again.
Life is awful, why do we bother?

Major: Loud blow of a whistle cuts off sentence from side room, major marches in, short whistle every step. Stops at Worrier.  Points to Bible under and gives them an encouraging fist pump.

Major: Signs off with a salute that turns into a thumbs up and then turns and marches out, with a whistle for each step.

Tricking the audience: A child goes all shy and not willing to start an item. The piano player comforts them, but then 'Major Encouragement' comes along and gives them the "encouragement call". They then have the confidence and start playing the following "shave and a hair cut" ditty:

[Interviewer on left, Rachel on right]

Interviewer head shot to camera initially , then turn to Rachel as talks: We’re here with Rachel, a reasonably new attendee of our church, thanks for chatting with us today, Rachel.

Bruce head shot:  Now you’ve been going through a reasonably tough time recently? Tell us about that:

Rachel head shot: Yes, life has been a little challenging recently. Most notably my husband and I have been unemployed for some time now, and that’s a rather stressful situation. Honestly, sometimes we wonder what God’s plan is, when everything we try comes up dry. Interrupt by whistle, looks right.

Wide shot showing Interviewer and Rachel and the Major marching in from right, who stops and gives the ‘encouragement call’.

Interviewer close-up: Ok... Where were we

Interviewer and Rachel wide: No, I’m all good now actually, thanks for that chat. [walks off]

Interviewer close up, talking to Rachel: No... worries.... [to camera and presently surprised]


As the speaker of the day finishes, or at the very end of the service, Major Encouragement comes on and points to a spacific audience menber. Then another, and another and then circles the whole audience. Gives a final loud "encouragement call" to everyone, and marches off.

Posters of Major Encouragement, giving his thumbs up solute, could be put up in the foyer during the service for people to see on the way out, calling for people to encourage one another.