Why does toast always land buttered side down?

The Edge, August 5, 2006
Scientists would have you believe it’s because there is not enough time for the toast to do a complete rotation when pushed off a waist-high bench. 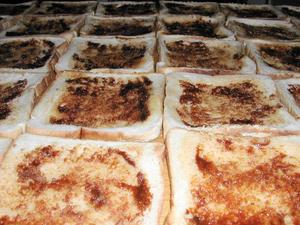 Not enough time? Well, excuse me! It’s not like the toast has any other appointments to keep. Nor have I ever seen one looking at the kitchen clock then dash off. And how can you say there’s not enough time for a measly piece of toast when hundreds of millions and billions of years worth of “enough time” is claimed to have been available for atoms to grow brains and turn into humans?
It’s stupidity to claim that given long enough anything is possible, actually.
Would two parallel lines meet, given long enough to decide it’s pointless for them both to continue on simultaneously?
Would the moon turn to grated cheese and pop itself inside a snap-lock bag, given long enough?
How about a pencil turning into a live, dancing pink elephant, wearing a black glow-in-the-dark tutu?
I’ll give you as many years as you want—IT WON’T HAPPEN.
And another thing, while we’re on the topic of quillions of years: Scientists claim “between 100 and 200 million years” for this and that. Nice one guys! Imagine if a weather forecaster said, “Tomorrow’s top temperature will be between minus 25 million degrees and positive 75 million degrees.
Or one’s partner comes in and asks, “When will you buy me flowers?” “Oh, sometime between tomorrow and 100 billon years, Luv.” Really useful!
If scientists claim these hiddemungious time frames and think they deserve respect for every other “finding,” then I’m sorry, you’ve lost me!
Oh yeah, toast, Marmite, floor . . . almost forgot.
Basically Marmite, like all other spreads applied to crispy bread, become “floormatised” from the knife running over it. Simple as that.
It’s safest to leave your toast on your bench spread side down. Not only will the toast never hit the floor spread down, but it won’t slide off the bench either!

Interesting Fact: For some reason, a thick coating of honey is the only spread that will never land spread side down if knocked off a waist-high bench.
Tags: Silly, The Edge
Newer Post Older Post Home