How long is a piece of string?

The Edge, September 23, 2006
This question is usually thrown back at someone to indicate that something can’t be given a definitive answer. But some satisfactory response can actually be given. “Twice half its length,” “measure it and find out,” “don’t go avoiding the topic” and “I asked first,” to name a few. 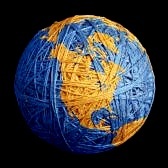 Theoretically string does have the potential to be an infinite length. Once you reach the end of one piece you can always tie on another and the two become one (no, not in the biblical sense, although, where does string come from?).
This means the piece of string is limited only by the dimensions of the universe. Because the universe does not actually have an end, a piece of string therefore has no limit to its length.

Speaking of space and string, a Mr Ballast Ring once set out to connect the Moon with the Earth via a piece of string. After several years, he was almost there when his stepmother-in-law, Mrs T Wine, came over while he was at work and “most helpfully” rolled it up again—he was understandably ropeable when he got home!

His project, done on a shoestring budget I might add, had many purposes:

1. A cheap form of communication (with Nutolene cans on each end) so astronauts could call their wives to say if they’ll be home late.

2. To make sure the Moon no longer floats out into space (Earth gets a new moon every month—costs us a fortune!).

3. A clothes line for ET’s undies—should he buy some to wear (he could also use it to “phone home”).

Back in Old Testament times, string was used as a weapon of mass destruction (before cotton balls were discovered).

Later on, its use was better realised as an alarm clock—with one end of the string tied to your big toe, a length was unravelled according to what time you wanted to be alerted, then the end furthest from your toe is lit. You’ll know when time’s up!

And now for the definitive answer: string is 20 minutes long—give or take an hour.