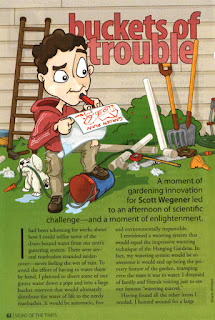 A moment of gardening innovation for Scott Wegener led to an afternoon of scientific challenge—and a moment of enlightenment.

I had been scheming for weeks about how I could utilise some of the drain-bound water from our unit’s guttering system. There were several rosebushes stranded undercover— never feeling the wet of rain. To avoid the effort of having to water them by hand, I planned to divert some of our gutter water down a pipe and into a large bucket reservoir that would ultimately distribute the water of life to the needy rosebushes. It would be automatic, free and environmentally responsible.


I envisioned a watering system that would equal the impressive watering technique of the Hanging Gardens. In fact, my watering system would be so awesome it would end up being the primary feature of the garden, trumping even the roses it was to water. I dreamed of family and friends visiting just to see our famous “watering marvel.” Having found all the other items I needed, I hunted around for a large bucket. All I could find were two large buckets that had been stacked together for several years. A quick attempt at separating the two showed they must have built a close relationship over the years.

I tried again, this time with more force—holding the outside bucket down with my feet and pulling at the rim of the inside bucket. No success; their bond was too great.

I wiped my brow, cricked my neck and psyched myself up like an Olympic weightlifter about to attempt for gold.
I gripped tight and—Three . . . Two . . . One . . . HEEEAVE! Eyes scrunched shut, veins popping, making my face bright red, my body convulsed as if I’d just completed a swim around Antarctica.

A roar of disappointment and relief emerged as I realised that victory was not possible—a retreat had been called by my brain. My ears were ringing, much like the sirens of an overheating power plant about to explode.

Conceding a round-three defeat, I stopped and let the blood drain out of my face. I knew I would have to outsmart these buckets. While a solitary bucket may look fairly unintelligent and ineffective, where there’s two or more, they are a force not to be underestimated.
I tried a screwdriver down the side to loosen them. Didn’t work. I thought of heating up the outside bucket and cooling the one inside. That sounded like a complicated procedure, so I kept thinking.

Almost out of ideas, something came to me from high school science class (or perhaps from experimenting while doing the dishes). What if there was a vacuum effect happening. No air could enter the cavity as they were being pulled apart.

Hoping to solve my problem I drilled a hole, the diameter of a garden hose, in the bottom of the outside bucket. I was going to do this anyway as part of the watering system. I thought this would allow air in and reduce any vacuum effect hindering the separation of the buckets.

So, hole in place and feet clutching the bottom bucket once more, pre-lift psych-up routine complete, I was in position for another heave—Three . . . Two . . . One . . . HEEEAVE, WHISTLE, THUD, CLANG! The whistle was the sound of air entering the hole as the buckets effortlessly separated. The thud was me ending up heels-over-head on my tail from the unnecessary amount of effort I’d put in.
The clang was the bucket I was pulling hitting the garage door behind me.

Again, mixed emotions. “Yay for me, the buckets are free,” and “OUCH!”

While I could probably draw many lessons from this story (like: “Something so small can have such a big effect on something seemingly so unbeatable”; “Sometimes seemingly destructive things happen but end up being for the better”; “You never know when what you have learned will come back to help you later in life”; “Never give up”; and “Be wary of buckets that hang out together”), I’ll leave you with the good news that my watering system did work wonderfully well. In fact, not long afterwards it flooded my backyard—but that’s another story!