What happens when you die?


The age-old question of what happens after you die has never been successfully buried. However, because the Bible refers to death being like a sleep, we can begin to understand the many side effects death has. 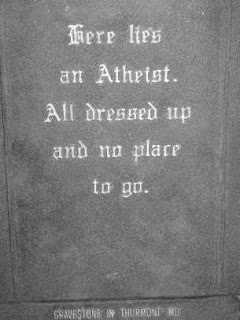 If death is like a sleep, this means—for some—death will bring much tossing and turning. This explains why coffins have padding on the inside. If there was no padding, those who tossed and turned all millennium would be covered in bruises and splinters at the Second Coming—until their eyes twinkled, anyway.

Others, as they sleep, will have dreams of speaking in public while dressed only in their funeral underwear or dream of flying into objects—probably as a result of their pallbearers not being of equal height.

Some will erupt into snoring upon their death, meaning family plots are not necessarily the best idea. This is why people are buried under six feet of dirt. It was figured out around 4000 BC that six feet of dirt is needed to fully muffle the sound of the loudest snorer. For dinosaurs, it’s much deeper to muffle old Rex’s snoring—and it is due to being so deep, and the resonances of the snoring, that they have turned into fossils.

The least side effects are had by those who are cremated, only having to endure a brief onset of “hot pillow” syndrome.

However, cremation is the most costly method of preservation for God, as He has to keep careful track of all your ashes for reconstruction at the Resurrection. Those who are scattered at sea are the biggest cataloguing challenge—but nothing is impossible with God.

Finally, regarding “heading toward the light” when you die.

It’s well worth approaching the light because it could be either God’s throne, which is a spectacular sight to witness; a train, which will take you across the universe to visit all the other worlds; or it’ll be Jesusland, a theme park created by Jesus Himself that has themed lands, including Parableland, Eternityland and Discipletown. Either way, take sunscreen.

Tip: Or you could just believe what the Bible has to say about it—”the dead know nothing” (Ecclessiastes 9:5)— and trust God to sort it out from there.