Agent Smith: As you can see, we've had our eye on you for some time now, Mr. Anderson.
It seems that you've been living two lives. In one life, you're Thomas A. Anderson, program writer for a respectable software company,
you have a tax file number, you pay your taxes, and you
help your landlady carry out her garbage. The other life is lived on Facebook, where you go by the profile name Neo and are guilty of virtually every status update crime known to man. 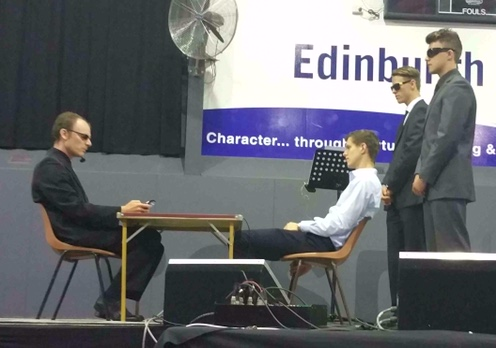 "Stubbed my toe. Worst pain in the world."
Really, Mr Anderson, worst pain... in the world.
Have you any idea of the pain others are going through around the world?


You also posted "Donated to the cancer council fundraiser, 50 cents well spent - it all adds up!".
Consider yourself generous do you, Mr Anderson?
Two posts later you shared how you spend $200 on hair gel... every month."
It all adds up... indeed, Mr Anderson.

And in the past month, you've posted no less than 29 selfies... including one with Gloria Gather

One of these lives has an eternal future, and one of them does not. I'm going to be as forthcoming as I can be, Mr. Anderson.
My colleagues believe that I am wasting my time with you but I believe that you wish to do the right thing. We're willing to wipe the slate clean, give you a fresh start and all that we're asking in return is that you stop posting trivial information about yourself, be a little more generous, and to start focusing on your real life character, which you'll have for eternity.

Neo: Yeah. Wow, that sound like a really good deal. But I think I got a better one. How about I poke out my tongue  - and you give me my phone so I can update my status.

Neo: You can't scare me with this Gestapo rubbish. I know my rights. I want my phone.

Agent Smith: Tell me, Mr. Anderson, what good is it posting a status update if you no longer have any friends following you...

[hands phone to henchmen 1 who start tapping on phone - Neo jumps up trying to stop him but henchman 2 holds him back as they all exit stage, Smith following, saying:]

Agent Smith:  Life is not all about who 'likes' you, Mr Anderson, it's about who you are like.
Tags: Castle Hill SDA, Fun, Play, Videos
Newer Post Older Post Home