Brief: a short drama leading to a sermon on "The Christian response to war".
Written: Scott Wegener and the Edinburgh College drama class 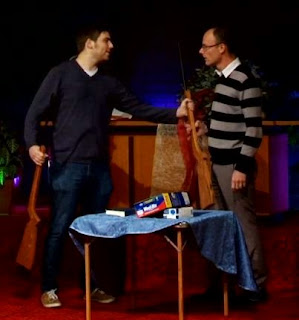 Chris enters slowly reading the Bible, and sits at a table with Weet-bix, SoGood and a bowl of breakfast, and puts Bible down and says a silent grace.

Chris, does three rhythmic tapping scrapes of the bowl - of which the third is the cue to start/sync both sound players - then keeps eating waiting the the sound fx to start

Sound FX begins with plane flying over from rear of church to front and a slightly delayed bomb rumble at rear then a louder blast, a second later, at the front. FX continue throughout with gunfire war sounds etc

Chris looks up at the sound of plane, looks alarmed at first explosion and at second loud blast they (secretly) wobble the table, knocking over the Weet-bix and they scramble under the table.

[Joe] Don't know, but whoever they are, we gotta take em out.

Joe tries to hand over a gun to Chris but Chris hesitates, taking a step back, avoids getting their hands close to the gun

Joe thrusts gun into the chest/hands of Chris, and leaves quickly, saying:

Chris quickly takes half a step with the gun too, agreeing, but quickly stops, turns and picks up the Bible. Stares at Bible in one hand, gun in other.
[optional ending addition] There's a big thump at the other door: Joe slowly looks towards the door.

Fade sound and lights as Chris looks at the door. Pastor gets up to speak. Chris could wait for pastor to start speaking, then casually places the props at front of table - (no longer acting) so audience can see the gun and Bible through the sermon, and walks out opposite door to Joe's exit.