Brief: A 5-minute drama on the topic of Compassion.
Written: Scott Wegener and the Edinburgh College drama class (a variation of Compassion Flakes)

~Narrator: He wouldn't help, he would ...laugh.

Jessie: My cat, Fluffy, got hit by a car yesterday.

~Narrator: He wouldn't speak kindly, he would... Make fun.

Cameron:  Doesn't surprise me - Fluffy as the dumbest cat I know. Dumbest name for a cat with no hair too

Jessie: She had cancer

Cameron:  What are you sooking about then, it was going to die anyway!

Jessie: [to imaginary bullies] HEY, give me my lunch back!

~Narrator: He wouldn't step in and help, he would... join in the bullying.

~Narrator: to watch a game of football ...

Jessie:  I’ve never flown before, not sure I can do this.

~Narrator: he wouldn't encourage them, he'd.... try and Scare them.

~Narrator: he wouldn't comfort them, he would ... Tease them.

Jessie: [walks up to chairs]

~Narrator: he would never move over.

~Narrator: He wouldn't ignore the error, he would tell everyone around him about the mistake.

One day the boy went to a doctor for an annual check-up.
The doctor was running very late, which annoyed the uncompassionate.

Cameron:  What’s taking you so long!

~Narrator:  Said the boy. And the doctor proceeded to tell him about the bad news he had to tell his previous patient.

Cameron:  I’m not dying and I’m in a hurry to go play my Xbox. 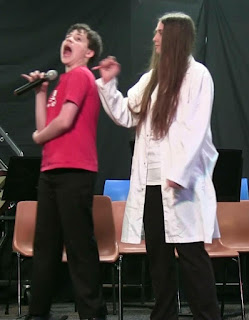 ~Narrator:  The Doctor was shocked at his lack of compassion. In fact He’d never seen such a bad case in the years he’d been practicing medicine – other than on Youtube.

~Narrator: He wouldn't laugh he would ...help.

Fortunately, you CAN choose to be compassionate all by yourself, without the need of a mysterious  injection.

And I think we all agree, if everyone was compassionate, what a better world it would be to live in! (drop script on ground)

Cameron:  Haha, you drop your script.

Cameron:  Well done. Well read. Give her a round of applause everyone.

[All walk off stage.]