Someone else, read this 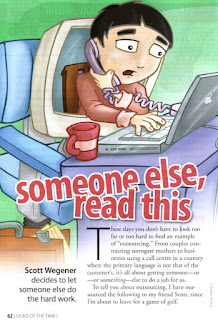 Scott Wegener decides to let someone else do the hard work.

These days, you don’t have to look too far or too hard to find an example of “outsourcing.” From couples contracting surrogate mothers to businesses using a call centre in a country where the primary language is not that of the customer’s, it’s all about getting someone—or something—else to do a job for us.

While we’re getting closer, we have yet to reach outsourcuration (is that a word?). But I’m sure somewhere in the world there are scientists working on ways to outsource maths exams, flossing and prostate checks.

Some people have someone else take out their rubbish, wash and iron their clothes, weed the garden, prepare the meals, wash the dishes, bath the kids - and I’m not talking about their spouses.

I know that if my golf-playing friend Scott, who’s outsourced the start of this article to me, were a million-millionaire, he would outsource all that and more. It would certainly leave his evenings free to play Playstation, which gets put aside all too often.

However, since spending time with his family is a better option, he should outsource his Playstation-playing time to a more skilled teenager. This way he gets to spend time with his family and get a higher score on the Playstation, as Scott’s ageing thumbs aren’t as quick as they used to be. With this extra family time, and being a million-millionaire, a family trip to Disneyland would certainly be in order. But it’s such a long flight from “Down Under,” and once you do get there, there’s all those long zig-zagging queues to stand in with deodorant-deprived teenagers.

It would be much less hassle, and create far less personal discomfort, to simply pay a family who lives near Disneyland to walk over and ride the Teacups for Scott’s family instead. They could send some photos of their visit and then Scott could have yet someone else Photoshop in his own family’s faces. He’ll have all the memories of the trip of a lifetime, and not have to miss out on, well, whatever is left to do around the house that he hasn’t outsourced.

I suppose it could be possible to outsource too much. When surrogate mothers find having other people’s babies a burden and start outsourcing their surrogacy, or when eating chocolate cake is no longer a personal task, these are sure signs of outsourcuration. (If I use a word twice, that surely makes it official, right?) Oh, Scott’s back from his game, he’ll finish the article off from here.  Well, I hope you’re enjoying this discussion on outsourcing as much as I did my golf. I birdied five of nine holes, which you can do when a pro subs for you.

I got a speeding fine in my haste to get back to you, though I’m sure there must be a way to outsource that penalty to someone else - along with my parking fine. It’s not as if I killed anyone, so I can’t see there being too much of a problem. Though, could I outsource jail time if I caused a fatality? I’m not sure how many takers there would be for that. Maybe if I offered enough money, and put a post on Facebook, surely one of my ‘friends’ would do a few months of jail for me.   I’m not sure about someone willing to do a ‘life term’ in prison for me? Or even less so, take on the death penalty for me! Now surely THAT would be the outsourcing holy grail, avoiding punishment of death.

Actually, that kind of outsourcing does exist, according to the Bible. The ultimate outsourcing opportunity we all have access to is the offer Jesus makes to stand before God as our representative on Judgement Day. Romans 5:7-8, NIV, says “Very rarely will anyone die for a righteous person, though for a good person someone might possibly dare to die. But God demonstrates his own love for us in this: While we were still sinners, Christ died for us.”  So our death penalty for sin has already been outsourced to Jesus, who died for us. Now surely that’s the ultimate outsourcing offer everyone should accept!
Tags: Devotional Story, Fun, Signs of the Times
Newer Post Older Post Home