Performance: Lilydale Seventh-day Adventist Church - December 24, 2016
Brief: A Christmas drama to introduce a sermon on 'What if Jesus was treated like royalty. What if Jesus never suffered'.

[ Door opens and Jo enters, crickets are heard in the background, moon/ stars on the screen]


Jo: Here we are. [looks around] This will have to do sorry. It’s like the last place available.
[put travel bag on ground]

[Presenter] Welcome to chapter 9 of Christmas made easy.
We hope you enjoyed the previous chapter on how to avoid Christmas with your in-laws.
In this chapter we’re discussing the most up-to-date, scientifically verified, gift giving techniques that will ensure your Christmas gift opening ceremony will be a success.
The first thing to consider when buying a gift for someone this Christmas, is how much you will spend on each person. Make sure you spend enough to suitably impress.

Brendan: Oh wow, a book. Thanks

[Two angels (1 & 2) walk on stage (balcony) all excited after finishing a worship service in heaven.] 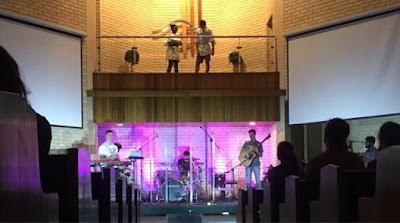 1: Wow, what a worship service that was

1: Actually I just did, I'm sure I said that last week

2: True, you did! And the week before

1: I tell you I never tire of worshipping them

2: Well, we don't actually tire of anything


The preacher of the day comes in the regular entrance to the church, behind the congregating, and shouts "Jesus is coming, today's the day!" And two or three musicians follow, starting happily into the hymn 'When we all get to heaven', walking down the isle behind the preacher.
Keep reading . . . »

A Mother with Whiskers

It needs to be said: a father is not just a mother with whiskers. In addition to all the parallel responsibilities there is actually a lot more pressure on being a father than being a mother.
Granted we miss child-birthing experiences, from obstetrician visits, to morning sickness, epidural needles, stretch marks, caesareans, 20-hour labours, nine-pound (4 kg) babies . . .

Imagine if we all got along. What an amazing world this would be to live in. No arguments, no fights, no greed, no hate, no lies. Almost sounds like the perfect society to live in, don’t you think?

However, before you run off and reconcile with all your nemeses in a quest for world peace, there’s one major problem with this dream: unemployment.

Can you imagine the job losses if everyone were nice all the time, in all circumstances?

Email ThisBlogThis!Share to TwitterShare to FacebookShare to Pinterest
Labels: Articles, Fun, Signs of the Times

Host: Today the Antique Rowena Show visits Nunawading. Roughly translated to mean ‘Come together’ Nunawading is a suburb indeed where people come have come together. Today people from far and wise have gathered together to examine some most exquisite possessions found in a unit, not too far from here.
Now, let’s join our experts and see what treasure we come across today.

Superheros of the Year

Announcer:  Ladies and gentlemen, thank you for attending the award ceremony where we crown our nation's Superhero of the year. Before we continue, let's have the nominees join me up the front. Give them a round of applause!

[Heroic 'Ben Hur' Music starts] A lady assistant, holding a medal on a plush pillow, leads two (or more) super heroes up onto the stage. Photographers take flash photos. and a couple during the opening speech also. The Superheroes stand shoulder-to-shoulder on one side of the announcer, the lady assistant stands the other side, not drawing attention to herself, ready for presenting the medal.

Those nominated don't do what they do for the glory, but just because they want peace and safety in our society.
As you all know, this award is not easy to earn. It takes acts of endurance, acts of selflessness, acts of foresight, acts of doing things no one else wants to do - even though they've already been working hard all day.

Let's meet some of the nominees;

Parable of the 10 Virgin Airlines

I'm going to tell you a story about a very Rich man. Let's call him RITCH-ard.
Richard was having a party. And he was
so popular there were 10 plane loads of people coming to his party. 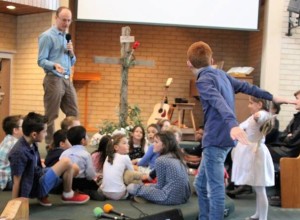 As all the planes approached the airport of the city where the party was being held there happened to be a large thunderstorm around the airport.

[Can you all make the sound of a thunder storm?] Or [drums or wobble cardboard]

So all the planes had to go into a holding pattern.

[Do you know what a plane holding pattern is? That's where planes fly safely in circles until it's safe to land at their destination.]

Now, 5 of the planes had filled up their fuel tanks to full, even though their flights weren't very far. They happily flew around and around and around waiting for the storm to clear.
The other 5 planes however only put in enough fuel to safely get to the airport and allow for a few circuits if there was fog or a little storm .
BUT, after 40minutes of circling these 5 planes had to go to the next closest airport to refuel.

So 5 of the planes headed out to land at the other airport to fill up.

If you drink, and drink and drive...

Siren “whoops” as screen fades in from black with police POV cam as he walks up to the driver window of the pulled over car from behind. When he gets to the driver’s window the driver looks a little agitated but gives a sheepish smile. Camera shot is into the car window, driver on left of screen slightly.


Police: Can I see you licence please..... You were driving a little quickly back there.

Police: Have you had anything to drink this evening, sir?

Driver: I have, that's why I was going so fast, sorry.

Police (cuts in): You have, have you. How much have you had tonight sir?

Driver: Well, 4 or 5 beers, a few glasses of wine and a few cocktails.